It used to be that building a house would start with owning the land. Each person bought a piece of land and built his house on it as he wished. These lands with neighboring buildings, separated from each other and provided passages through and all of these together created the city. As traditions became modern and the city became metropolis, there was a shortage of land. To try to multiply the land in various ways and with various results was inevitable. Dom-Ino is not the first instance of such effort but with its straightforward structural logic is the most famous in our times. This multiplied plot of land destroyed the logic of ownership entirely and the concept of the apartment was born anew. The new apartment, born out of the logic of land multiplication and reinforced concrete slab, created a new way of having a house which along with its benefits did not accept many responsibilities and it most fundamental was: land ownership.

You had a house but could not own its land and when the land is not yours, you are obligated to buy something pre-designed and pre-built. Moreover, the inevitable regulations of the city on one hand and the requirements of the structure on the other was introduced to the situation in favor of the new apartment and the freedom of building and residing was limited to a few bricks which you – whether you or your house architect –  can stack here or there.

The game must be staged anew. The land must be returned to the resident of the house. There is no escape from the logic of multiplication but the land must be taken back from the structure and returned to the architecture, the architect and the house owner. So the structure must be driven away from the text to the context and become a bed on which the multiplied land is stabled and the needs and lifestyles of man are formed on familiar land and architecture once again becomes the tool of achieving this need and freedom.

The resident who owns the building and its land once more, in mutual coordination with the developer and following the laws which both are appropriate to the city plan and regulations and also with the natural environment of the building/private city, knows what he is doing with his land: he may build it today. Or may postpone it or may someday rebuild what he has built today with a new form and application.

The old pattern of buildings, breaching the residents’ freedom and desire for change, is decreasing in lifespan every day. Building/private city has brought forth a pattern in which buildings have longer lifespans as they welcome change in a way that takes a new shape with new need; so malleability and flexibility, as with any intelligent life, will increase its lifespan. This pattern promises a new developer. A developer which has avoided the micromanager role and has accepted the role of macro-planner of building/private city. As if he is the mayor of a “mini-city” a bed for the life of citizens enjoying the highest level of freedom. a city with a long life cycle and welcoming to desire for change: a “long-lasting” city/building.

Building is usually a text laying on the bed of the city. But this time, building itself has become a bed for composing the architectural text, a concrete large-scale building which is cheaper than its metal counterpart and is more functional in the introduced pattern. the house and land which the pattern plan metaphorically referred to, in terms of structural techniques, are the usual concrete roof waffle slabs and the houses are built on them with independent architectures and structures; light structures which are also supplying the contemporary aesthetic need of houses which are appropriate for the grand strategies and policies of the developer.

The majority of the city is functional building masses but these buildings are necessarily connected to arteries that enable movement and accessibility: various passages. Providing access from one point to the other is only part of the responsibility of passages, and maybe not even be the most critical responsibility: through the passage the city is comprehended. Passages are in fact receptive of the city’s comprehension. Land/houses of this building/city are connected through three passages which due to their height above ground are defined in three elevation levels. these passages in comparison to the small scale of the city and in the scale of the architecture are more or less large-scale, and are built with a special building consideration of large-scale structure. The weight of these passages is tolerated through large bars that are laid on the body of the towers. 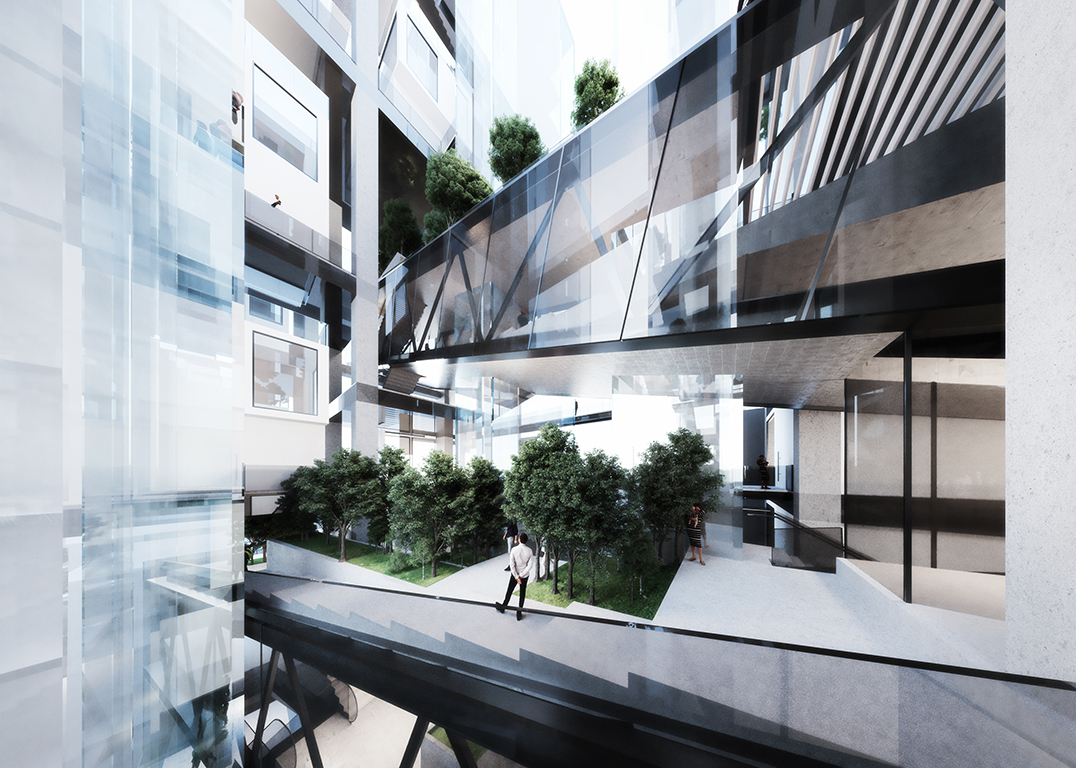